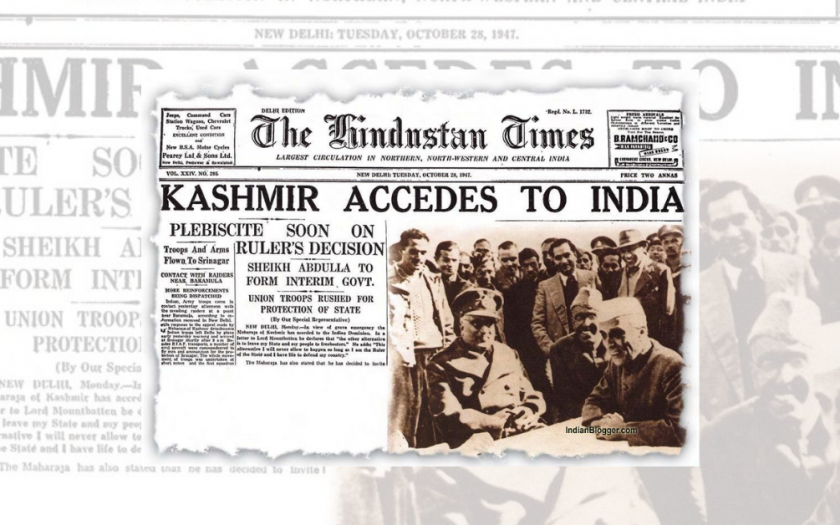 With autumn coming to an end in Kashmir and people bracing for the chilly winter, Jammu & Kashmir’s constituent assembly (J&K CA) held its first session on October 31, 1951, in Srinagar. A proclamation for setting up of the assembly had been issued on May 1 by the Regent Karan Singh. Much like the Indian constituent assembly, J&K’s constituent assembly was convoked in rather tumultuous circumstances. For one, the Kashmir question was still pending before the UN Security Council. The infamous Dixon plan which called for a partition of J&K and a plebiscite in the Kashmir valley had just been ruled out by Pakistan and attempts made by the commonwealth at mediation between India and Pakistan had failed to yield any results.

Meanwhile, the government in J&K had enacted the Big Landed Estates Abolition Act, 1950 that implemented the ‘land to the tiller’ policy of the National Conference. On the question of compensation for estate owners, Section 26 of the Act provided that the final decision-making would rest with the constituent assembly of the state. Further, Article 370 of the Indian constitution provided that the constitution and the constitutional relationship between India and J&K would be designed by J&K’s constituent assembly. While these were some of the stated objectives of the assembly, Sheikh Abdullah in 1951 hoped that the assembly would also pronounce its verdict on the question of accession.

The elections for the J&KCA were conducted in the months of September-October 1951. The assembly comprised of 75 members in total of which the number of women stood at two. Both of them – Ishwari Devi and Ram Devi belonged to the Jammu province. Ghulam Mohammad Sadiq, who went on to become the fourth prime minister and the first chief minister of J&K, served as the president of the assembly with Hiranand Raina serving as the secretary.

Even though courts in India have repeatedly held that constituent assembly debates are not authoritative aids to interpretation and have therefore steered clear of being regimented to an originalist understanding of the constitution, these debates nevertheless do play a role in shaping of constitutional discourses. They reveal reasons and principles underpinning the constitutional text.

In the case of J&K’s constitutional status, the debates perform one more function – they contradict and at times verify the Indian constituent assembly debates on Kashmir. Therefore, any discourse on Article 370 and J&K’s constitution is bound to be skewed if it only places reliance on the ICAD. Consider the question of the nature of India-J&K relationship. Ayyangar explaining Article 370 to the ICA states: ‘the effect of this article is that J&K state, which is now a part of India, will continue to be a part of India, will be a unit of the future federal republic of India’. Recall that no merger agreement was signed by J&K and when Ayyangar was giving this speech, the instrument of accession (IoA) was governing the state’s relationship to India which did not lead to incorporation of J&K in the Indian territory. On the other hand, J&KCAD reveal very different intentions and expectations from the relationship to India. The report of the Basic Principles committee is telling of a completely different vision that the assembly held for the India-J&K relationship. The report [Pg. 797] reads as follows: ‘While retaining its autonomous character, the State will continue to remain acceded with the Union of India. The sovereignty of the State resides in the people thereof and shall except in regard to matters specifically entrusted to the Union be exercised on their behalf by the various organs of the State’. Therefore, for anyone to understand the constitutional status of J&K, the ICAD can only guide to a certain extent since the speech by Ayyangar deals primarily with the passage of Article 370 in the ICA. On the specifics of the relationship, J&KCAD are essential. Since the aspirations and expectations of the J&KCA seemingly diverge from that of the ICA with respect to the nature of the India-J&K relationship, or simply because the debates go beyond the ICAD (since the ICA was dealing with a limited set of questions in a different context), relying on the J&KCAD becomes necessary.

The J&KCAD also shed light on facets of constitution-making that have largely remained unexplored. It is worth pointing out that the J&KCA did not derive its authority from Article 370 nor was it abiding by the text of the provision. Consider for example the concurrent list of the Indian constitution. Article 370 specifies in its clause 1(b) that the Indian parliament can legislate on a subject from the concurrent list if the President on consultation of the state government so specifies. And, as clause 2 makes it clear the subjects applied on consultation were not required to be placed before the J&KCA for ‘such decision as it may take thereon’. While drafting of the constitutional order of 1954, the constituent assembly excluded the concurrent list in its entirety from application.

Further, Article 370 requires that the state government give concurrence to the Indian president for extending subjects going beyond the IoA. But, this power, as I have argued here, is limited in time i.e., Article 370 only permits these concurrences in the pre-constituent assembly phase (1950-51). As soon as the constituent assembly is convoked, clause 1 of Article 370 becomes redundant. This is further proved by how the 1954 order came to be enacted – quite contrary to the processes of Article 370, the order was drafted, debated, and passed in the J&KCA before being sent to the Indian president for promulgation. The concurrence given was that of the J&KCA and not of the state government. Consider Girdhari Lal Dogra’s resolution [pg. 978] on the 1954 order: ‘a) having adopted the report of the drafting committee this day, the 15th February, 1954; and b) having thus given its concurrence to the application of the provisions of the Constitution of India in the annexure to the aforesaid report. The assembly authorises the government of the state to forward a copy of the said annexure to the government of India for appropriate action.’ As is evident, the state government’s authority to give concurrence had ended and the Indian president was acting on the concurrence of the J&KCA.

On questions like the temporary nature of Article 370, the J&KCAD offer some much-needed guidance. Mirza Afzal Beg’s speech [pg. 694] on the fate of Article 370 post-dissolution of the constituent assembly is instructive: ‘So long as it [constitution-making process] is not completed, Article 370 will remain there and when it reaches completion, we shall give to parliament what is parliament’s i.e., centre will have the acceded subject and the rest will remain here. Article 370 is therefore temporary till we complete our constitution…its spirit will be incorporated in that constitution’. The report of the Basic principles committee [Pg. 800] stated: ‘The committee is of the opinion that it is high time that finality in this [Indo-J&K relationship] respect should be reached and the relationship of the state with the union should be expressed in clear and precise terms’.

When we take this into account the argument that powers under Article 370 could be exercised from time to time falls flat. The question as to why the J&KCA did not make a recommendation in terms of clause 3 of Article 370 has not been asked before nor seriously engaged with in scholarship. Only a deeper exploration of the J&KCAD, the politics of J&K between 1951 and 1957, and correspondences between the state and union will enable us to answer this question that has remained unanswered for far too long.

With respect to the specific question of interpretation of Article 370 and the India-J&K relationship, these constituent assembly debates hold significance but there are certain problematic elements associated with the J&KCA – its constitution, elections, and the way it conducted its proceedings – that must be included in any analyses of constitution-making in J&K. As per Noorani, the two – “massive electoral fraud” and non-compliance with the UNSC resolutions (Res. 91 in particular) – give enough reason to question the very legitimacy of the constituent assembly and the constitution-making process. On the question of ratification of accession, it is worth pointing out that the state’s accession was never formally ratified by the J&KCA. The adoption of the drafting committee report (which contained the 1954 order) by the assembly was passed off as an act of ratification [Pg. 965].

But as I point out before, the J&KCAD matter not just for interpreting Article 370 but also because they reveal certain important facets of constitution-making in J&K that have the potential to radically change how we have been looking at Article 370 until now.