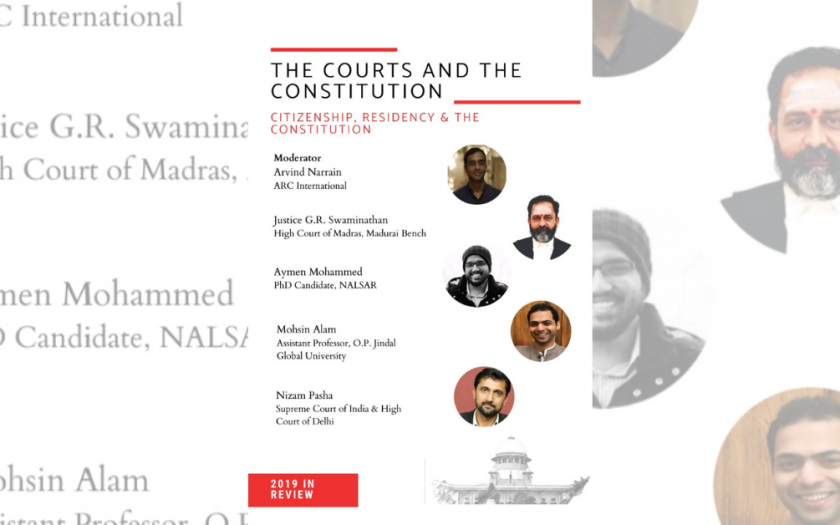 As we mark one year since the controversial Citizenship (Amendment) Bill was signed by the President and turned into an Act, we release the panel on Citizenship, Residency and The Constitution held during The Courts & The ConstitutionConference, 2020 organized by NALSAR University of Law, Hyderabad in collaboration with Law and Other Things and Azim Premji University.

Arvind Narrain, the panel moderator, started the discussion by introducing the panellists and setting the stage. He summarised the major issues spoken by all the speakers at the end of the discussion, which has been presented in the end of this transcript. Arvind Narrain invoked Hannah Arendt ‘right to have rights’ conception of citizenship and hoped that the Court would uphold the substantive understanding of Article 14, which has already been reflected in the popular protests against Citizenship Amendment Act (“CAA”).

Justice Swaminathan gave a brief overview of his judgment in P. Ulaganathan v. UOI wherein he observed that statelessness is a violation of Article 21. He commented on the legislative competence of the Parliament to enact Citizenship Amendment Act, 2019, and advised for an engagement with the views of those supporting the CAA in order to facilitate a conversation.

Aymen Mohammad then drew upon federalism and Article 355 of the Constitution so as to point out how the Union was wrongly justifying its protection of the federal units. He also elaborated upon the procedural shortcomings of National Population Register (NPR) and found the trio of CAA-NPR-NRC to be incorrigibly violative of individual privacy.

Mohsin Alam Bhat drew upon his experiences from Assam so as to enlighten the audience about the twilight of citizenship by explaining the inhumane functioning of Foreigners’ Tribunals. He observed that a culture of fear, excess of law, and mass suspicion were being furthered by the current Union government.

Thereafter, Nizam Pasha discussed in depth the Sarbanda Sonowal I & II judgments and showed how the Court was acting as an administrative authority, rather than a constitutional court examining the question of citizenship. He focused upon the procedural and substantive lapses while dealing with the entire NRC process, including the lax appointment procedure for Foreigners’ Tribunal members, disproportionate burden of proof etc. He also questioned the use of the doctrine of under-inclusion in the context of citizenship and the Ambedkarite idea of constitutional morality that can be invoked to challenge CAA.

Please find the portion of the Conference Publication covering this Panel attached below. We invite response pieces, critically analysing and engaging with the arguments raised by the speakers. (Kindly see Write for Us! for further guidelines).

You can find the video recording here:

[…] attached herein below. One can also find the video recording of the panel discussion here or HERE . We invite response pieces, critically analysing and engaging with the arguments raised by the […]

[…] The video recording of the panel discussion can be found here. […]

Call for Response Pieces: Citizenship, Residency and the Constitution - VBLSA

[…] The video recording of the panel dialog could be discovered here. […]

Thank you for this information. This article is very useful those who are facing this problem. You are doing such a good work. If you have any other issue so you can contact me. This is my honor if I help you
Advocate for Supreme Court of India