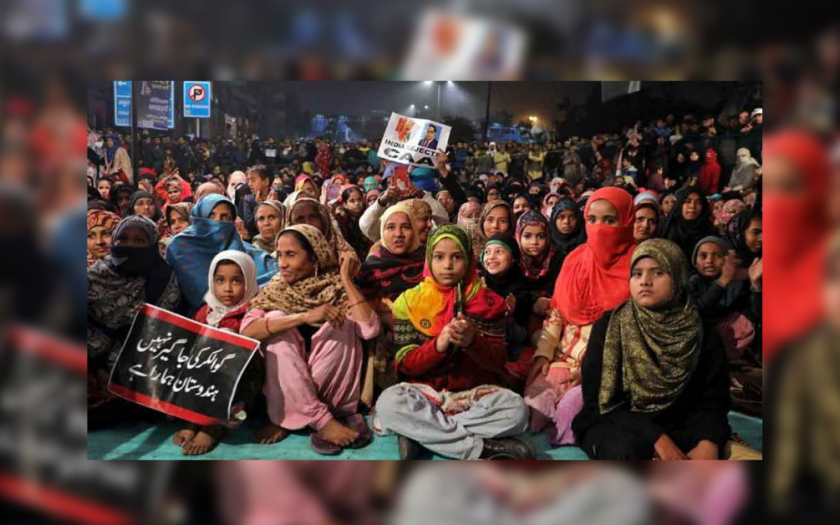 In December 2019, the Government passed the Citizenship (Amendment) Act 2019 (‘CAA’), which specifically distinguished ‘illegal immigrants’ on grounds of religion and country of origin. Privileges were granted to Hindus, Sikhs, Jains, Buddhists, Christians, and Parsis, and every other religion fell outside the purview of this protection. This overt discrimination and categorical exclusion of Muslims among other religions sparked nationwide protests and attracted global criticism.

Although the anti-CAA protests were largely peaceful, on December 15, the Delhi police forcefully entered Jamia University following a confrontation with violent protesters and disproportionately attacked several students. In response to the police brutality in Jamia, the protests in Shaheen Bagh, a Muslim working-class neighbourhood in Delhi, gained prominence. Shaheen Bagh soon became the political epicentre for anti-CAA protests, marshalled by peaceful Muslim women at the forefront.

During the protest, the Kalindi Kunj-Shaheen Bagh stretch in Delhi was blocked by the protesters and several roads unrelated to Shaheen Bagh were barricaded by the police from December 15, 2019, till March 24, 2020. The Supreme Court (‘SC’) heard a petition regarding the blockade and observed that the protesters were blocking public ways and hindering access to these roads. The court held that public places cannot be blocked indefinitely in such a manner and that protests can happen only in “designated sites”, emphasizing that the freedom of assembly should yield to the people’s right to use the public ways. A review petition filed against the judgment was also dismissed.

In this article, we argue that this judgment is in stark contrast to international standards on the right to freedom of assembly and is bereft of sufficient legal justification, despite the right being protected under Articles 19(1)(a) and (b) of the Indian Constitution. Article 21 of the ICCPR and Article 19 of the UDHR, both of which India is a party to, also emphasize the duty of each state to protect peaceful assemblies.

Gaps in the judgment

The right to peaceful protest which is guaranteed under Articles 19(1)(a) and (b) is a positive right that casts a positive duty on the State to enable the exercise of the right in question. However, the Court noted that “the question was where and how the protest can be carried on, without public ways being affected”. This characterisation is problematic because it automatically presumes that protests cannot take place in a public place or affect public ways.

Several international courts and documents have, however, recognized that assemblies are legitimate uses of public spaces just like any other vehicular or pedestrian movement. A peaceful assembly cannot be restricted merely because it obstructs day-to-day activities. An assembly can be restricted for reasons of traffic only in exceptional cases where the disruption is “serious and sustained”. In this case, while the assembly was sustained, the seriousness of the disruption to traffic arose from the actions of the police rather than the peaceful protesters as stated by the former Chief Information Commissioner Wajahat Habibullah, a material fact that the Court did not take cognizance of. Instead of enabling peaceful protests by minimizing the disruption caused, the State blocked roads unrelated to Shaheen Bagh, ergo causing more traffic disruption.

While analysing the actions of the protesters, the Court observed that “public ways and public spaces cannot be occupied in such a manner and that too indefinitely.” By doing so, the court has undermined the importance of protests in public places. Furthermore, there is no definition for the term ‘indefinitely’, leaving questions on the permissible duration of protests in public spaces unanswered. The judgment is also silent on how the sites would be designated for protests or how many sites would be designated in a geographical location. These ambiguities make this judgment vague and overbroad, and hence unreasonable even by Indian standards on free speech. This also sets a dangerous precedent for all future protests.

Additionally, the Court stated that “the present case was not even one of the protests taking place in an undesignated area, but was a blockage of a public way which caused grave inconvenience to commuters.” To this end, the Court went on to rely on the judgments in Himat Lal and Mazdoor Kisan Shakti Sangathan and based its reasoning on striking a balance between the rights of the protestors with that of the commuters. However, this line of reasoning is incorrect. The right to freedom of assembly can only be restricted as per Article 19(3). As per article 19(3), the rights and freedom of others is not a reasonable ground for restricting assemblies. Attempting to balance this right with the rights of the commuters not only erodes its status as an independent fundamental right but doing so is also incorrect as it is not a permissible ground for restriction under Article 19(3).

The Sight and Sound Principle

The Court observed that “Democracy and dissent go hand in hand, but then the demonstrations expressing dissent have to be in designated places alone.” However, this line of thought robs the protesters of the full enjoyment of their freedom of assembly under international law.

International law recognizes that the right to choose the time, place, and manner of its conduct is at the core of the right to freedom of assembly. The choice of location within the sight and sound of their target audience is crucial in ensuring the effective realisation of this right. In this judgment, by stating that protests should happen only at designated sites, the SC has failed to recognize this principle. This is concerning in the context of Shaheen Bagh protests for two reasons.

First, the implementation of the CAA comes with the potential of effectively rendering several Indian Muslims stateless. Shaheen Bagh, being a Muslim-majority area, was a key location for expressing dissent regarding this issue that concerned the lives of millions of Muslims. Second, given Shaheen Bagh’s close locational proximity to Jamia, it was symbolic for the peaceful sit-ins to take place in Shaheen Bagh post the Jamia violence.

Restricting protests to designated sites comes with the possibility of the sites being in remote locations and poses hindrances to commute. Considering anti-CAA protests happened pan-India, the consequence of restricting protests to designated sites alone, deprives protestors across the country of their right to choose their target audience in an issue of such national importance.

While the right to freedom of assembly in India is not absolute, it is also significant to note that any state action should always be in the nature of enabling this right. Even in exceptional circumstances where restrictions are permitted, a proportionate balance must be struck between an individual’s right to assemble and the permissible grounds for restrictions under Article 19(3). Further, it should be noted that assemblies conveying dissent enjoy a higher level of protection against restrictions.

Under Article 19(3), the only possible ground for restriction here is ‘public order’. Public order cannot be vaguely used to restrict protests as the restrictions on assemblies need to be precise and unambiguous. The Shaheen Bagh protest is an instance of peaceful protest which indirectly affected public order due to the prolonged barricading of roads by the police. While this might have justified dispersal of the assembly, it is a deeply disproportionate response to impose a blanket ban on all protests in ‘undesignated’ public places.

As posited above, this judgment fails to answer the questions of how, when, and where such sites would be designated. In effect, it merely restricts public protests without enabling them through alternative, less intrusive means. It is thus an unreasonable and disproportionate interference that has a chilling effect on the citizens’ rights to freedom of speech, expression, and assembly.

In addition to being legally inconsistent, this judgment is also socially problematic. It is not an isolated instance of curbing the rights to assembly and free speech. Rather, it comes in the background of a history of censorship and human rights crises in India, instantiated by the Kashmir internet shutdown, the authoritarian UAPA regime, and the clampdown on activists. This culture of insensitivity towards protests and assemblies can also be seen in the State’s response to the recent Farmers’ Protests which was criticized by multiple international bodies.

The Shaheen Bagh protest and the subsequent review petition presented the SC with the opportunity to inculcate international standards and enhance the existing jurisprudence on the rights to freedom of assembly, speech, and expression. This judgement should have been the watershed moment where the sight and sound principle was incorporated into the Indian jurisprudence. However, this was an opportunity missed as the judgment only served as a blow to India’s existing standards of these rights. It is a further step back in the realisation of free speech and assertive citizenry and has created an atmosphere of fear unparalleled in recent Indian history.  Given the ambiguity and the lack of clarity in the judgment, the future of peaceful protests in India is now stained with further uncertainty.