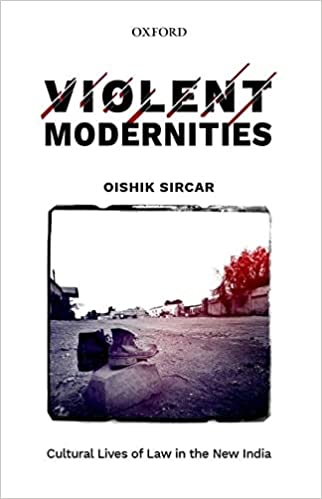 [Ed Note: Over the next few days, we we will be running a book discussion on Oishik Sircar’s “Violent Modernities: Cultural Lives of Law in New India”. This is the first review by Siddharth Narrain. The introductory post by Adil Hasan Khan can be found here. ]

Violent Modernities is a collection of essays by the legal scholar Oishik Sircar, covering a range of issues related to law, society, and culture in India between 2000 and 2010. Sircar’s introduction to the book frames the key questions that animate these essays and provides a conceptual framework to understand the theoretical concerns that the author is engaged with. The essays in the book draw on a wide and impressive array of scholarship across disciplines, reflected in the book’s extensive bibliography.

The strength of the book lies in its theoretically grounded and close analysis of key developments in public law in the 2000-10 period that support the central arguments of the book – that law and violence are in a symbiotic, and not oppositional relationship, and that constitutionalism and the project of legal rights is deeply tied to global liberal and neo-liberal economic policies. Some of the key themes that Sircar highlights in the book include the relationship between law and violence; the relationship between Hindutva and neoliberalism; a critique of legal interventions in the field of sexuality politics, and a broader critique of constitutionalism in relation to social movements.

In engaging with public law debates between 2000 and 2010, the book highlights the personal engagement of the author in these debates, using a self-reflexive mode, giving it a distinct flavour and style. The overall mood of the book is steeped in skepticism, locating hope in the practice of acknowledgement of failures and inadequacies of political projects, as well as locating struggles in “the unremarkable and quotidian”. However, there are moments of lightness and humour that provide relief in the style of narration. One of these is when Sircar describes Upendra Baxi as ‘Dumbledoresque’, “at once sagacious and pragmatic, caring and responsible, scholarly and activist”.

Sircar’s critical view of progressive legal measures in this period, ranging from court interventions such as the Section 377 litigation in the Delhi High Court and Supreme Court to social welfare measures introduced by the UPA government, is a powerful antidote to the temptation of misplaced nostalgia towards this era, when one compares it to the excesses and problems of the current political moment. The essays in the book are a reminder that many of the draconian measures of the Modi regime post 2014, including the tightening of FCRA restrictions and the curtailing of civil liberties through draconian laws, were also part of the Congress party – led UPA government policy.

The Critique of Contemporary Sexuality Politics and the 377 Litigation

One of the arguments that Sircar makes, where he offers a warning on the way sexuality politics could lose its critical edge and be coopted both by both Hindutva politics and the neoliberal economic framework, has proven to be prescient. Today, LGBTI and sexuality rights activism is riven with internal fault lines, with the most obvious divide being between those who support the Modi government and BJP party line over its majoritarian and authoritarian policies and those who don’t. These divisions have taken centerstage in allegations of policing of the kinds of signs and slogans that are acceptable in public events such as Pride Marches, and criticisms of ‘homonationalism’ and the increasing labeling of ‘good’ and ‘bad’ queers, leveled at the organizers, and as a rising phenomenon more generally. Through the arguments made in it, Violent Modernities speaks directly to these developments.

However, when it comes to the specific critique of the Section 377 litigation, especially the privacy argument made in the case, Sircar’s analysis would have benefited greatly if it had been put in conversation with rebuttals of this critique. For instance, Mayur Suresh, in an essay written post the Supreme Court’s 2018 Navtej judgment has argued that the privacy argument in the Section 377 litigation was far more complex than merely a right to be let alone or a right based on geographical and spatial autonomy. Relying on a wide range of court documents, and records of discussions leading up to the filing of the Naz petition in 2001, Suresh has shown why the privacy argument is based on both decisional and spatial aspects. This in turn has implications for the scope of the benefits of decriminalization that extend beyond elite, privileged gay male circles. Suresh has persuasively argued that the right to privacy in the Section 377 litigation, far from being merely the right to have sex in the privacy of one’s bedroom, “is about owning one’s sexuality and gender”. For Suresh, Naz and Navtej have provided a way of “articulating one’s claim to a place in public life and a way of living in society”. Suresh has pointed out that critiques of Naz posed by Sircar, Saptarshi Mandal and Ashley Tellis, are based on an inadequate formalist reading of the 377 litigation, relying on the final declarative sentence that refers to “sexual acts in private” in the Delhi High Court’s 2009 judgment.

Reading the Past in Relation to the Present

This leads me to, what is from the viewpoint of a public law scholar, and someone invested in contemporary socio-legal scholarship in India, a major shortcoming of the book. Although Sircar has covered vast ground in the multidisciplinary literature that he references in the book, there are significant gaps in the literature that he has relied on, especially the body of public law scholarship that has emerged in the last five years. Engaging with these texts would have added valuable nuance and strength to the main arguments of the book. Here I am referring to work that has direct bearing on the central arguments of the book such as Rohit De’s groundbreaking work in The People’s Constitution (2018), situated in the early period of Indian constitutionalism and locating it within “the daily interpretative acts of ordinary people”.[i] This body of work also includes Anuj Bhuwania’s Courting the People (2017),[ii] which presents a powerful critique of public interest litigation in India, Gautam Bhatia’s work on transformative constitutionalism in India (2019),[iii] and Akshay Khanna’s work that evaluates the 377 litigation and LGBTI movement in India through the frame of ‘sexualness’ (2016).[iv]

Sircar, in the introduction to the book, clarifies that the essays have been written in the 2000-10 period and so must be seen as a product of their time and evaluated in that light. The introduction ties together the essay themes and makes key conceptual claims. However, as someone reading the book today, I cannot evaluate these essays without reference to the contemporary political moment. Sircar’s criticism of legal interventions defanging movement politics does not sit well with contemporary debates around the gradual capture of legal institutions and a subversion of the Rule of Law, a development that Tarunabh Khaitan describes as “killing the constitution with a thousand cuts”. The battle to save these public and private institutions from a complete take over by the BJP government and its supporters complicates Sircar’s framing of the relationship between law and violence as complementary and symbiotic. Part of this dissonance between the arguments in the book and the contemporary political moment in India is related to developments since the 2010s, including the consolidation of majoritarian Hindutva politics, resulting in a massive parliamentary majority for the ruling BJP.

The spectacle of court proceedings and judicial decision driven constitutionalism that Sircar addresses in Violent Modernities has been overshadowed by the spectacle of Modi-driven executive policy decisions such as the 2016 demonetisation debacle, and anti-minority legislations such as the Citizenship Amendment Act and the National Register of Citizens. From the resurgence of mass mobilization and movement politics in the form of the anti-CAA and farmers’ protests, it is clear that the legal battles being fought by these movements have not judicialized or blunted their edge. This point was driven home when the Supreme Court’s attempts to intervene in the farmers’ protests were rejected by the protestors who continued their mobilizing despite, and alongside, other legal interventions. Violent Modernities would have benefited if Sircar had reflected on these contemporary developments in relation to the book’s essays. Although in the introduction, Sircar does weave in the key themes of the essays in relation to the impetus for a ‘New India’, this does not adequately address the disjuncture between the arguments made in the essay and the legal and political developments in India post 2014.

Violent Modernities is an important intervention in the field of law and social sciences in India, written from a critical legal sensibility and viewpoint. The book is a significant contribution to socio-legal scholarship in India. As both an insider, and outsider, Sircar is ideally placed to provide a critique of constitutionalism and rights-based activism in India. He does so with nuanced and theoretically grounded arguments, covering vast ground across a range of disciplines. This book is essential reading for those interested in understanding the period leading up to the current political moment in India, and public law debates between 2000 and 2010.

[i] Rohit De, A People’s Constitution: The Everyday Life of Law in the Indian Republic (Princeton University Press, 2018).

Siddharth Narrain is a legal scholar and lawyer focusing on public law and socio-legal issues . He is currently a doctoral candidate at the School of Global and Public law , Faculty of Law and Justice, UNSW, Sydney.