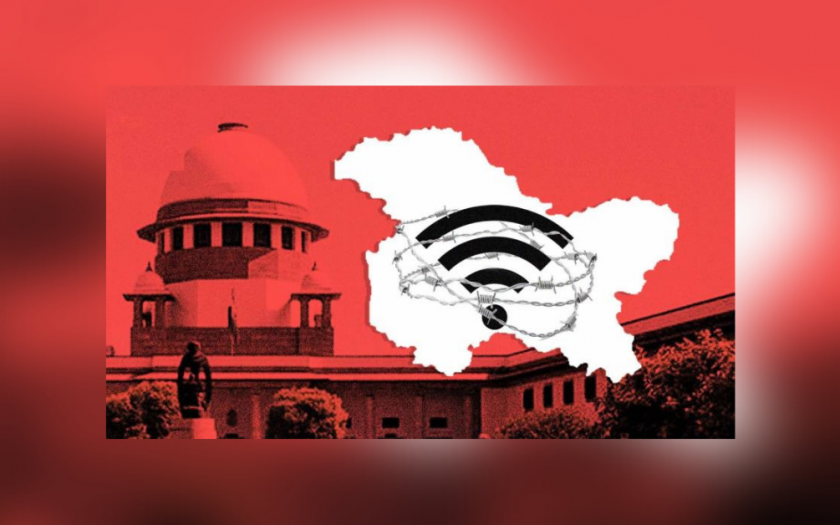 Ed Note: As part of our New Scholarship Section, we have been inviting discussants to respond to specific articles. This piece is a part of a series of posts discussing the public law themed research articles featured in Volume 9 of the Indian Journal of Constitutional Law. You can access all the posts in this discussion here. In this piece, Sumeysh Srivastava responds to Devdutta and Apar’s ” Jammu & Kashmir Internet Restrictions Cases: A Missed Opportunity to Redefine Fundamental Rights in the Digital Age” summarized here.

Devdutta Mukhopadhyay, and Apar Gupta from the Internet Freedom Foundation, in their paper “Jammu & Kashmir Internet Restrictions Cases: A Missed Opportunity to Redefine Fundamental Rights in the Digital Age” present a notable effort in documenting and explaining the jurisprudence around recognizing the right to Internet access and protecting the same within the Indian Constitutional system. Specifically, the paper traces the recent Supreme Court Judgements related to the internet shutdown in the erstwhile state of Jammu and Kashmir. For me, the paper highlighted some key takeaways

The paper begins with an overview of the internet shutdown in Jammu and Kashmir and the subsequent legal interventions against it in the Supreme Court. As the authors have pointed out, the court has consistently limited its role when it has had to review administrative actions taken on the grounds of national security. I partially agree with the authors that the judgement in Anuradha Bhasin is a more dangerous version of this trend, but I do not fully agree with the authors that the court failed to provide any justice.  First, the court made it very clear that the state is obligated to disclose information to fulfill the right to remedy under Article 32, as confirmed in Ram Jethmalani v. Union of India. In para 15 of the judgement, the court specifies that “a democracy, which is sworn to transparency and accountability, necessarily mandates the production of orders as it is the right of an individual to know”. The court confirmed that protections available under 19 also extend to the internet, with the rider that the restrictions imposed on 19 would also apply. The court also confirmed that the test of proportionality applies while reviewing all government actions that curtail fundamental rights and would also apply here. The court extended this further to clarify that an indefinite internet ban would not be a proportional restriction and all executive actions of such nature are up for judicial review. I also do not agree with the authors assertion that the court’s understanding of an emergency is flawed. The court discusses the concept of emergency in some detail, and then concludes, correctly in my opinion, that “we may only point out that the ‘public emergency’ is required to be of serious nature, and needs to be determined on a case-to-case basis”. The court has also asked the state to consider allowing access to websites comprising essential services in areas where internet access is not restored. These are important points, and it seems that the court is trying to strike a balance between providing relief while also not encroaching the space occupied by the executive. There are of course many flaws in the judgement, and the authors have highlighted these in some detail in the paper. For me, the biggest problem was that once the court has acknowledged that executive decisions of this nature need to be in the public domain, and restrictions on internet must be proportionate, it is inexplainable that the court does not question the state further on these points. This is important, because if the executive action is shown as arbitrary, then as per Ajay Hasia v Khalid Mujib Sehravardi, this can be struck down as a violation of Article 14. The Tata Cellular case, is generally considered as clarifying the scope of judicial review of administrative action. The three elements required are Illegality, Irrationality, and Procedural Impropriety. The authors have detailed how the petition incorporates the presence of all three elements, but the court does not address any of these elements satisfactorily.

Further, it is quite clear from the judgement that the court is cognizant of the geopolitical situation of Jammu and Kashmir. The history of terrorism in Kashmir has been acknowledged and the state has also shared some data points for the same. I do agree with the author’s that the court failed to establish a convincing link between internet access and terrorism and should have pressed the state further to show the link between restricting access and increasing terrorism. In this context, it would be interesting to see if the court shows the same amount of reluctance to engage if the restrictions on internet are posed in Delhi for example.

In my opinion, there are two main flaws in the Anuradha Bhasin petition. First, as the court has pointed out, there was no direct nexus shown between the restrictions imposed and the restriction of the freedom of press. The petitioners were not able to show any one specific order that restricted their freedom of press and argued for a cumulative effect, thus showing an indirect connection, rather than a direct one. Further, the fact that other similarly situated newspapers were able to publish during the same period further weakened the petitioner’s case. Second, it has been pointed out that the internet shutdown in Kashmir has consequences which go beyond the freedom of expression. In my article here, I have criticized the court for not recognizing this. However, the fact remains that this is something which was not covered by the petitioners as well.  This is something that could have been highlighted in the paper to give some context of the court’s judgement. Additionally, throughout the Anuradha Bhasin case proceedings, we can see the state talking about allowing limited internet access, or 2G internet access and the court acknowledging this as a sign of easing of restrictions on internet access. Here, the authors could have discussed the concept of ‘meaningful connectivity’, which essentially talks about minimum standards required for internet access to be meaningful. This is also something which could have been mentioned in the petition when the court was discussing how the state is easing restrictions.

The author’s then move on to discussing the second case, Foundation for Media Professionals v. Union Territory of Jammu and Kashmir & Anr. The petitioners in this case improved on some of the flaws I have identified earlier in Anuradha Bhasin. First, it was mentioned that internet restrictions effect not only the right to freedom of speech and expression, but also the right to health and education.  Secondly, they have tried to show how internet shutdown has affected a wide section of society by sharing testimonies of people from different professional backgrounds.

However, the court was even more reluctant to engage in this case. I fully agree with the authors that the court had an opportunity to improve on its judgement in Anuradha Bhasin, which was squandered. As the authors point out, the court had already given enough grounds for review in Anuradha Bhasin, and the petitioner’s contentions in the Foundation case were based on the same. However, the court did not meaningfully engage with any of these contentions. The authors have mentioned how the court ‘outsourced’ its decision making to an executive committee and I cannot think of a more appropriate term to describe this. The court did not engage with the additional factors of right to education and health or the data added to the Foundation case.  In my opinion, the Anuradha Bhasin case was essentially framed as a question between 19 (1) (a) and 19(2), making it easier for the court to defer to the executive on the grounds of national security. This was not the case with Foundation, which posed slightly different questions which the court should have engaged with in more detail. It is truly ‘Evasion by Abnegation’, as pointed out in this blogpost, which details the extent of the court’s failure when it comes to the Foundation Case.

In the final part of the paper, there is a brief discussion about the nature of a right to internet access. The authors correctly point out that currently, the right to internet access is recognized as an auxiliary right, which facilitates the exercise of different rights under Article 19. The paper also highlights that the court’s assertion that other than 21A, all other fundamental rights are negative rights is misleading. Various positive rights have been recognized under Article 21, often recognized based on socio-economic goals recognized through the Directive Principles of State Policy. I have argued that the right to internet access should be located as a part of the right to life, because of its role as being an essential element for exercising various socio-economic rights. This contention is also forwarded by the authors, who state that the internet is now not just a means of communication, or information but an essential lifeline which fosters “economic participation, social inclusion and civic engagement”.

In the conclusion of the paper, the authors discuss how these two cases have some positives for the future; First, the court not dismissing the nature of internet as an essential requirement, and supporting the same, albeit in a limited conceptual framework as an instrument for the Freedom of Speech and Expression. Secondly, by reaffirming a minimum standard of judicial review even in cases that affect national security, and finally by giving strong directions against an infinite internet shutdown. The authors are correct in concluding that the main talking point would remain the reluctance of the court to engage in all the points considered in the case, especially with reference to the Foundation of Media Professionals case.

It also gives us an indication of future jurisprudence around the right to internet access. Limiting internet access to just a medium for the freedom of expression if a flawed approach and does not reflect the importance of internet access in the lives of individuals and communities. However, the journey to establishing internet access as a positive right will need more data, analysis, and investigation on the relation between internet access and other socio-economic rights, with the specific context of India.

Sumeysh is a legal researcher who writes on issues of access and technology.