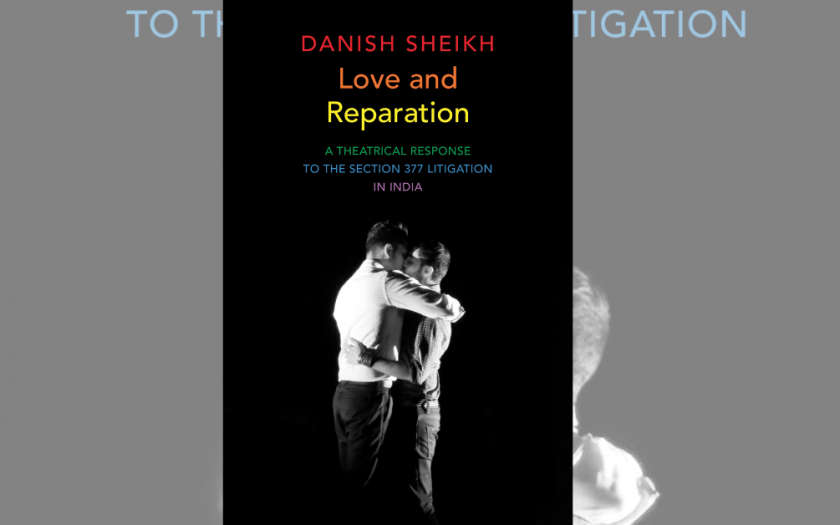 [Ed Note: Over the next few days, we shall be discussing Danish Sheikh’s new book, Love and Reparation: A Theatrical Response to the Section 377 Litigation in India (Seagull Books, 2021). This is the second review of the book by Akhil Kang. The introductory post by Douglas McDonald and other reviews can be found here.]

In the lovely spring of February 2018 in Delhi, Danish staged his play Contempt to a packed audience which seemed tired of how long the courtrooms would drag the Section 377 case (“section, not article!”; “IPC, not Constitution!”). Talks about the legality of the writ petition of the historic 2013 Naz Supreme Court judgment, the unfairness of how queer folks were mis-understood in the most hallowed halls of justice, and hello(s) and hi(s) between the who’s who of human rights lawyers ­– or rather the steely silence of hello(s) and hi(s) between some lawyers who would be expected by everyone from outside the legal world to get along – filled the air. But mostly, the room felt excited. Excited to see how a lawyer so closely involved with the Section 377 case proceedings would translate the law into theatre. Excited to see how the law ­– which governs us all and yet remains to be accessible and easily understood by a majority of the country – would be depicted in this play.

Delhi, of course, is no stranger to theatre and the art of translating social issues into theatrical forms. With a rich history spanning decades, celebrated performers in the city have taken theatre to the streets, literally. Contempt however was staged in a ticketed venue whose doors shut to anyone even a few minutes tardy. The play since that February night has been played at multiple venues, law schools, etc. Danish’s ‘Love and Reparation’ does what Contempt failed to do. It makes law more accessible. In many ways, it goes beyond the law. It gives us a moment to appreciate what many queer folks have been denied – the mundane and not just the fantastic lives of Section 377. The full, broken, somewhere-in-between queer lives of Section 377.

This book tries to capture the frustration, complexities, and failures with not just the proceedings leading up to the (in)famous judgment, but with the law itself. It takes us to the courtroom where the judges ask demeaning questions, a therapist’s office where a gay man laments about his love and heartbreak, to meetings before and after the judgement where stakeholders argue bitterly with one another, and to the heartbreaking testimonies that might or might not have made it to the courtroom. Through ‘interludes’ in the book, Danish tries to capture how self-indulgent strategizing, collectivizing and deliberation around Section 377 has been over the years. Although at many moments, the fact that the queer liberation is classist, casteist, and ableist is not spelled out enough. Dialogues challenging the politics around this legislation feel tokenistic. When the gay man in therapy casually throws in how the illegality of the law was not much of a burden for him – I held that moment close to me and I realized as much as I wanted to like this man in therapy, I knew I would not if I ever run into him on the streets. There is only so much Plato referencing I can handle! Not to mention that most celebrated queer-friendly therapists are infamously known among dalit-queer folks to be extremely casteist and dismissive of caste generational trauma. Plato, and globe-trotting heartbreaks (as the gay man in therapy talks about) is affordable to only a few.

Nevertheless, the richest moments of this book are the ingenious ways in which it plays with works of fiction and affidavits, and demonstrating what crafting a relationship of repair with the law looks like. However, like many works done on sexuality in South Asia, this book falls into the same trap of understanding sexuality in isolation. What does it mean to talk about reparation, repair with the law in our country, which is actively diluting legislations meant for caste-based hate crime? I write this review at a time when the law is increasingly being used to imprison marginalized dissenting voices, labor laws are amended to suit capitalist interests, unchecked police powers are overwhelming peaceful protestors, State governments are using legislations in the name of protecting love and women to target minority religious groups, taxation laws and rules governing sedition are being manipulated to ensure carefully curated fascism. Considering these politico-legal formations occurred simultaneously with the Section 377 proceedings and continue to occur while other forms of queer rights are being articulated in law courts, the work of repair with the law, that Danish explores therefore, is complex. This book does not engage with this radical practice critically and misses out crucial junctions where sexuality is multi-faceted.

This book offered many dialogues which could function as perfect segues into why the Section 377 case should not just bury itself into the sexual and to precisely talk about the aforementioned moments. The arguments for same-sex marriage currently undergoing legal battles across many legal courts in the country cite police protection available for inter-caste lovers, and arguments asking for ensuring protection for queer love cite inter-religious lovers’ freedom to uninhibited private lives. These are just few examples of how rights around sexuality are deeply embedded in inter-religious and inter-caste love. However, ‘love’ in this book just remains…love. Not to say that the gay man in the therapy should have specifically mentioned the social location of the man he loved, but precisely the fact that he did not have to indicate how ‘love’ in Section 377 lives (and this book) falls hollow for me. In a world where radical queer activists and scholars across regimes are pointing out how imperialist, capitalist and fascist governments are ‘pink washing’ violent narratives, I would argue that desi-queer upper caste scholars need to stop ‘rainbow-washing’ violent narratives. That is, when testimonies and experiences are so blatantly telling us stories of multiple stratifications, desi-queer upper caste scholars tend to subtract all those complexities and present them only as queer/gay ones.

This book is a good resource for a legal curriculum, a must-read for people who feel lost while understanding inaccessible legal language. Sadly, for me, the book does just enough, but could have done so much more. I love/not-love-it-that-much this book!

Akhil Kang is a Ph.D. candidate in Socio-cultural Anthropology at Cornell University. His Ph.D. project focuses on anthropology of the elite. He is academically and politically interested in shifting the anthropological gaze away from lower caste individuals and understands victimhood and woundedness as articulated by upper caste individuals/savarnas. He is an interdisciplinary scholar working at the intersection of several fields including feminist and queer studies; affect and media studies, postcoloniality and biopolitics. Prior to enrolling at Cornell, Akhil received his B.A. LLB (Hons.) from NALSAR University of Law, Hyderabad, and is a registered Advocate with Bar Council of Delhi. Born and raised in Jalandhar (Punjab, India), he has been involved in queer and anti-caste activism and human rights lawyering. He has worked on several projects including, the role of men and masculinity in child marriages in India, feminist law archiving, and understanding gender and the sexual in institutional student movements & political formations in India. He writes about sex, desires and politics at https://www.desi-underground-gay.com/