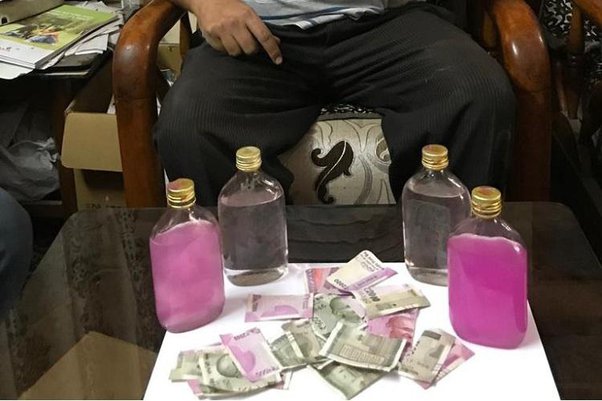 An accused is entitled to certain rights under common law criminal jurisprudence such as the presumption of innocence, and the burden of proof lying on the prosecution, among others. One such cardinal right is the right against self-incrimination which means no accused can be compelled to give testimony against oneself. This principle is enshrined in article 20(3) of the Indian Constitution. However, the prevailing practice of conducting a phenolphthalein test to catch a public servant receiving illegal gratification under the Prevention of Corruption Act, 1988 (hereinafter ‘PC Act’) violates Article 20(3). To understand how the test violates Article 20(3), it’s important to understand the process of the phenolphthalein test along with its jurisprudential value.

THE PHENOLPHTHALEIN TEST AND ARTICLE 20(3)

The protection from incriminating oneself emanates from the maxim of the “nemo teneteur prodre accussare seipsum” which translates to “no man is bound to accuse himself”. This principle is enshrined in article 20(3) of the Indian constitution which states “No person accused of any offence shall be compelled to be a witness against himself”. Article 20(3) acts as a weapon in the hands of an accused to not give testimony against themself, which can otherwise result in a successful prosecution. Notably, the protection under 20(3) can be invoked in the pre-trial stage also. There are three requirements to be met to invoke protection under article 20(3): firstly, the person should be accused of an offence, secondly, he must have been compelled to be a witness, and lastly, the compulsion must result in giving evidence against oneself.

The first requirement that a person has to meet for seeking protection under Article 20(3) is that he must be accused of an offence at the time he makes the testimony. It’s necessary that a formal accusation is made against a person pleading the guarantee under article 20(3) and that it should relate to the commission of an offence that may result in prosecution. What amounts to an accusation is an interesting question. To determine whether a person is formally accused of an offence, its pertinent to take regard of the nature and scope of the proceedings, the nature of the accusation, and its probable consequence. Therefore, in R.B. Shah v. D.K. Guha, the Court held that lodging of an FIR results in a person being accused for the purposes of Article 20(3).

With regards to the phenolphthalein test, it’s submitted that the trap procedure initiates only after an FIR is filed against a public servant. It is only then that the preparation is carried out to conduct the trap process which includes smearing phenolphthalein powder on currency notes. Moreover, the probable consequence of a successful trap procedure is the filing of a charge sheet before the Special Judge, ACD. Therefore, it can be said that the public servant is formally charged with accusations at the time of giving testimony.

The second necessary condition is that the accused should be ‘compelled’ to be a witness i.e., to give testimony against themself. According to Iyer J. in Nandini Satpathy v. P.L. Dani, the act of ‘compulsion’ is not restricted to physical threats or actual violence but includes psychic torture, atmospheric pressure, environmental coercion, tiring interrogative prolixity, over-bearing and intimidatory methods and the like. Any sufficiently substantial method applied by the police to attain information from an accused strongly suggestive of guilt, regardless of it being subtle or crude, mental or physical, direct or indirect, amounts to compulsion. Any act of compulsion “must run” i.e., must be done by another person or authority. Further, the testimony should possess the tendency to incriminate the accused i.e., it should make the case against the accused a probable one by acting as evidence against themself.

It is a settled position of law that a trap procedure is legitimate where the offence has already been born and is in its course. When there is reason to believe the complainant had his own reasons to arrange a trap or when evidence is suspicious the trap arranged by the vigilance is illegitimate. A trap arranged at the instigation of somebody or who for his own reasons is interested to see that a particular public servant is trapped is an illegitimate trap. It can be argued that the rampant nature of the trap procedure may allow it to be misused for inducing the public servant into false prosecution which may bring fatal consequences to him such as disciplinary proceedings against his employment, irretrievable loss of social reputation, etc.

This requirement for pleading the protection under Article 20(3) can be divided into two stages: i) the testimony of a person should be ‘evidence’ and ii) Must result in incrimination against themself. Notably, the fact that the phenolphthalein test results in incrimination against a public servant have been proved with the help of the cases provided above and hence satisfies (ii).

With regards to (i), it is to be noted that the term ‘evidence’ is to be interpreted broadly. In M.P. Sharma v. Satish Chandra, the SC held that any act of the accused which has the potential to incriminate the accused is evidence. It’s not restricted to oral evidence and includes the production of documents, making of intelligible gestures, and lip movements. In other words, the testimony resulting in ‘evidence’ need not be evidence as provided in any of the Indian laws but any significant thing which has the potential to help the prosecution to proceed against the accused. In the given case of the phenolphthalein test, the results of the test are used by the prosecution to show that the ‘illegal gratification’ has been duly accepted by the public servant, and consequentially, a presumption is drawn against them under Section 20 of committing an offence under the PC Act.

The Constitution of India provides safeguards to the persons of India. One such safeguard is the protection against self-incrimination under Article 20(3). However, this protection is flagrantly encroached by the phenolphthalein test and the general trap procedure laid down by ACB. The pressure and torture faced by the public servant and his inability to contest against testifying the phenolphthalein test results in leading evidence against themself which eventually leads to the rising of the presumption against them for committing an offence and maybe, in successful prosecution. It’s hoped that the judiciary will evaluate the phenolphthalein test on the touchstones enumerated under article 20(3) and protect the constitutional rights of an accused.