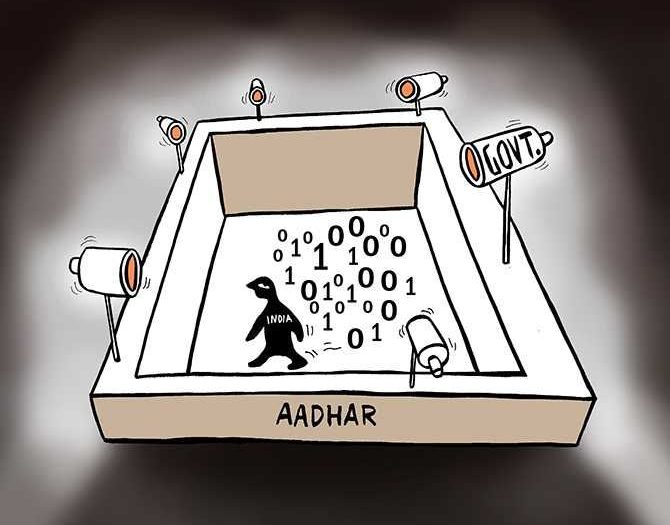 This piece is Part 2 of a two-part series discussing the exclusionary effect of the Aadhaar Act. Section 142 of the Social Security Code was notified in May 2021 and requires employers and unorganised workers to establish their identity through their Aadhaar numbers. However, this measure goes against the holding in the Aadhaar judgement, and would fail a proportionality analysis. It would lead to large scale exclusion from the PDS and other benefits, infringing upon workers’ right to social security.

Section 142 of the Code, which is the only section of the Code that is currently operational, requires employees and other unorganised workers seeking to avail benefits under the Code to establish their identity by linking their Aadhaar details. The section states that an employee or unorganised worker must “establish his identity or, as the case may be, the identity of his family members or dependants through Aadhaar number” to register as beneficiaries for social security benefits, or avail other social security services.

The stated purpose for the collection of these details is to weed out duplicates or false claimants in the system, and for the creation of the National Database for Unorganised Workers. The E-Shram portal has been created for the formation of this database. This piece seeks to demonstrate that Section 142 of the Code detracts from the larger purpose of the Code, which is to increase the reach of social security in India.

Incongruence with the Aadhaar Judgement

Social security benefits are an important part of how labour law in India is designed. They play a role in ensuring safeguards for the health and welfare of workers, and help ensure that citizens are able to avail a basic standard of services. On the basis of Article 38 of the Indian Constitution, the National Labour Commission even recommended that the right to social security be termed as a fundamental right. The linkage of Aadhaar and Social Security is problematic both on grounds of privacy and access.

The Justice K.S. Puttaswamy v Union of India (“Aadhaar judgement”) affirmed that Aadhaar could be linked only if funds are being drawn from the Consolidated Fund of India (CFI) [paragraphs 321-322]. The Social Security Code and its Draft Rules have rendered Aadhaar necessary for registration and facilities like the Employees’ State Insurance Corporation (ESIC) or Employees’ Provident Fund Organisation (EPFO). Funding for the EPF is covered under the Employees’ Provident Fund and Miscellaneous Provisions Act, 1952, and not the CFI. Further, an EPFO order had previously mentioned that employers would not be penalised in case of non-seeding with Aadhaar.

Employee pensions, insurance, provident funds, gratuity, and maternity benefits come through employer funding, and not through the CFI. Therefore, mandating Aadhaar linkage in order to avail these benefits would be clearly violative of the Puttaswamy judgement, which held that Section 7 of the Aadhaar Act would not be applicable in the case of earned benefits.

Examining the Proportionality of the Measure

The case of Modern Dental College v. State of Madhya Pradesh laid down a four-prong test in order to assess the proportionality of an impugned measure. This test was further reaffirmed in the Aadhaar judgement.The test is as follows – First, the measure has to have a legitimate aim. Second, there needs to be a rational nexus between the aim and the act performed to achieve the aim. Third, it is required to be the least restrictive measure that can be adopted to achieve the same purpose. Fourth, the competing interests have to be balanced. It is argued that Section 142 fails this test of proportionality.

In reference to the first prong, the Aadhaar Judgement affirmed that Aadhaar linkage could be mandated only to access benefits, services and subsidies that are derived from the CFI. EPF contributions come from the pockets of the employees and employers, and as such, the funds are not drawn from the CFI. This means that the June Circular, read with Section 142 of the Social Security Code, would contravene this holding in the judgement, rendering the aim of the move illegitimate. It would also be violative of Articles 14, 19(1)(g), 21 and 300A of the Indian Constitution.

Next, vis-a-vis the second prong, one needs to examine whether a rational nexus can be established between the proposed move (Aadhaar linkage for social security, pensions and other benefit access) and the aim of the provision (preventing leakage of resources and streamlining beneficiaries). Existing systems under prevailing schemes provide unique identification systems through some form of numerical identification, which means that linkage of Aadhaar specifically might not be as necessary as has been made out to be. Further, in terms of eliminating fraud in terms of claiming of benefits, Aadhaar linkage will only serve to eradicate certain forms of identity fraud – it cannot serve to eliminate those who are claiming under schemes through false pretences, or in the specific case of the PDS, frauds in terms of quantities of distributed foodgrains.

Even in situations where a portion of the pension is contributed by the government, such as through the The Employee’s Pension Scheme, 1995, or in the event of special schemes such as the Atmanirbhar Bharat Rojgar Yojana (“ABRY”) where the government pays provident fund contributions, the Aadhaar judgement mentions that the purpose of linking is to plug leakages in the system while ensuring that benefits reach intended targets. This refers to a situation where workers who do not have an Aadhaar card are excluded from benefits, in addition to a prevailing reluctance to employ them due to their lacking an Aadhaar card. Further, Aadhaar seeding would also prove difficult for those such as migrant workers who might be unable to readily source documentation. This brings further questions to any claims of a rational nexus between the proposed aim and the action taken.

The third prong of the proportionality test requires us to examine whether the proposed measure is the least restrictive one. As mentioned previously, the right to social security has been termed as a fundamental right. Studies have shown that when used in the PDS, Aadhaar authentication failure rates have been shown to be as high as 12%. There have been noted failures in technological systems. Authentication failures have, in the past, resulted in the denial of the right to food, and can also lead to the denial of social security. Further, there was no consideration of alternative measures prior to requiring Aadhaar seeding. For instance, the Internet Freedom Foundation, in its comments on the draft bill, had suggested the use of social security cards. The Tamil Nadu PDS uses smart cards. This indicates that Aadhaar seeding might not have been the least restrictive measure that could have been adopted. In any case, sufficient reasons for non-consideration of alternative mechanisms have not been provided.

The fourth prong of the test requires the balancing of competing interests, and is something that can be easily established. On one hand, there exists a need to streamline and consolidate details of beneficiaries under various government schemes, especially those that draw from the government’s treasuries. However, there is sufficient evidence to show that the proposed measure of Aadhaar seeding has only resulted in increasing burdens upon employees and workmen, and has jeopardised rights to food and social security, which have both been recognised as fundamental rights.

The preamble to the Social Security Code states that its goal is “to extend social security to all employees and workers either in the organised or unorganised or any other sectors and for matters connected therewith or incidental thereto”. India’s experience with Aadhaar seeding in welfare schemes has thus far been large scale exclusion, which goes contrary to the proposed objectives of the code, and thus, needs to be reevaluated.

Good to see this blog.