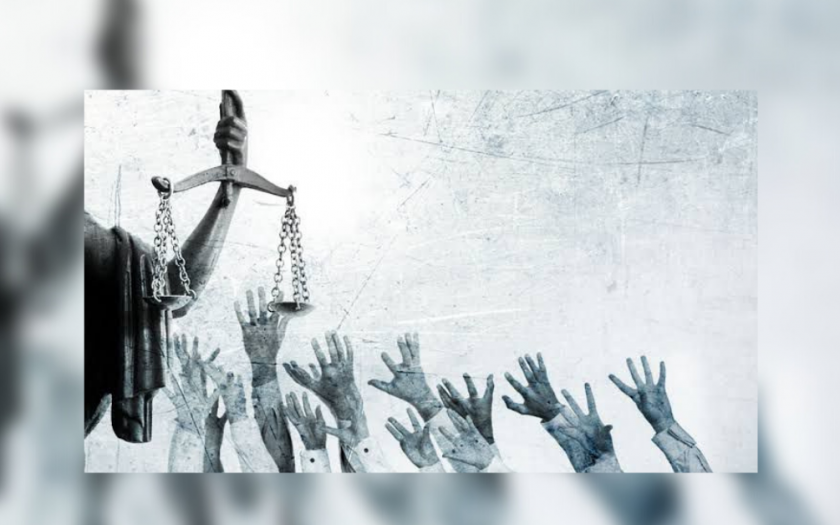 [Yash Dodani & Ishika Garg  argue that there is a constitutional duty on the judiciary to ensure that judicial spaces are accessible to those with disabilities, furthering the spirit of substantive equality, and suggest steps in this direction. It has been edited and coordinated by Mariyam Mayan from our student team. The picture is a black and white image showing a number of hands reaching out to the scales of justice.]

Recently, the Madras High Court installed a Braille printer at its principal seat in Chennai for providing copies of judgments and orders to those who are visually challenged. High Court websites across the country have also made audio captchas available to ease access to certain content for persons with disabilities. In response to Justice D. Y. Chandrachud’s comments, tribunals like the National Green Tribunal have also removed watermarks from their orders to make them easier to read and navigate through for the visually challenged. While these moves are laudable, they reignite the debate around whether our judicial spaces are accessible enough for persons with disabilities.

In 2005, the e-Courts Project was conceptualised by the Government, and an e-Committee was set up to oversee this project. One of the aims of the Project is to make the justice delivery system more accessible. Given the uncertainty surrounding the pandemic and the possibility that Courts might shift to virtual mode at any time, the functioning of the e-Committee becomes of increased relevance. This article attempts to explore the importance of the aim of increasing accessibility to the justice delivery system, in light of the goal of achieving substantive equality. In furtherance of this goal, it discusses the hurdles that both digital and physical judicial spaces present for persons with disabilities. Lastly, it discusses certain suggestions that can be incorporated in order to remedy these hurdles.

Discussions which lie at the intersection of accessibility and disability often lead to the conclusion that a person is disabled not by their impairment, but by virtue of the myriad barriers that exist in society. For instance, an individual is ‘handicapped’ by having to use steps instead of ramps to climb floors in a building and not simply because of a difficulty in walking. This line of reasoning led to the conception of the social model of disability. While this model helps us understand that we must shift our focus to society, rather than the individual when it comes to conceptualising disability, it is the concept of substantive equality which allows us to eliminate barriers that hinder inclusivity.

As held in the case of Jeeja Ghosh v. Union of India, in the context of the rights of the differently abled, one of the most crucial components of substantive equality is the principle of reasonable differentiation. This principle recognises that different classes of people require different treatment, and hence, one must reasonably differentiate between those who are equal and those who are not.

A closely linked concept under the umbrella of substantive equality is that of reasonable accommodation, as recognised in the Vikash Kumar v. UPSC case. The principle of reasonable accommodation is founded in the norm of inclusion. It acknowledges that if disability as a social construct has to be remedied, conditions conducive to the development of the disabled have to be affirmatively created. When certain services or facilities are placed outside the purview of persons with disabilities, it leads to their exclusion, and subsequently, serves as a denial of their right to equality. The task that substantive equality requires us to perform is two-fold. First, we must reasonably differentiate these groups of persons from the rest of the society. Second, we must seek to reasonably accommodate such persons in the society by not just preventing, but remedying the direct or indirect discrimination they face.

In line with the paradigm of the social model of disability, the Court in Vikash Kumar imposed a duty upon the State to ensure that such persons are reasonably accommodated in order to create a more inclusive society. Facilitating access to information to those who are differently abled has been recognised as a fundamental part of such duty on both national and international levels. In fact, Section 42 of the Rights of Persons with Disabilities Act, 2016 explicitly requires persons with disabilities to be provided with complete access to information. As recognised in the case of  Disabled Right Group v. Union of India, not making such information available amounts to discrimination. Such information would invariably include judicial pronouncements, orders, etc.

However, despite various efforts, the current infrastructure of the judicial system still reflects ableist values and is largely inaccessible to persons with disabilities. For instance, while the websites of the High Courts have made audio captchas available for the visually challenged, the technology used is lacking. Many times, the audio captcha does not play even when clicked on. Even if it does play, the audio is usually incomplete and the visitors then have to refresh the site multiple times in order to hear the complete captcha. In a few instances, when the visitor clicks on the audio playing button, it gets directed to other spam sites, hence causing great inconvenience to the visitor. These are the kinds of barriers that visually impaired persons have to face if they wish to gain information by accessing judgments or orders. In fact, most of the tribunal websites have no provision for audio captchas till date.

These issues are reflective of the larger systemic accessibility hurdles that exist in the judicial spaces. Out of the 6000 trial courts surveyed as a part of a recent study, as many as 67% were found inaccessible for people with disabilities. Such infrastructural lag exists due to many reasons ranging from the lack of adequate funding to insufficient consultation with persons with disabilities when designing these spaces. Either way, the goal of attaining substantive equality takes a hit, and systemic discrimination against persons with disabilities continues.

When remarking on the issue of readability due to watermarks on tribunal orders, Justice D. Y. Chandrachud made it clear that while tribunals do not fall under the Supreme Court, the e-Committee will look into the matter. Similarly, the absence of an audio-captcha on tribunal websites can also be addressed by the same committee. Another issue that needs to be addressed is the absence of a colour contrast option on the websites of some of the tribunals (such as the Income Tax Appellate Tribunal). This option should be made available for the ease of those who have a colour vision deficiency. In addition to this, there are certain steps that need to be taken to improve accessibility not just in the digital, but also in the physical realm. Below, we have provided a (non-exhaustive) list of some of the possible steps that can be taken:

In order to do justice to the idea of substantive equality, judicial spaces need to be made more accessible in both the digital and physical contexts. Incorporating the suggestions provided by the authors would help improve the accessibility of judicial spaces for those who are disabled. It is time that we step up to our responsibility of making justice accessible at the temples of justice.