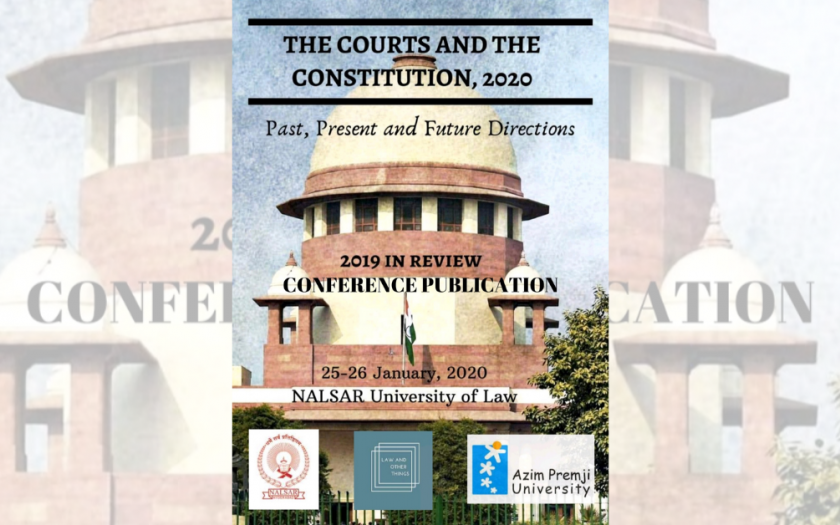 NALSAR University of Law recently concluded the second edition of its ‘The Courts and the Constitution Conference’ held in partnership with Azim Premji University and the blog Law and Other Things. The idea behind this annual conference is to review some of the major decisions of Courts delivered in the preceding year.

The Opening Session on 25 January was a tribute to Dr. N.R. Madhava Menon, who passed away in 2019. Prof. Faizan Mustafa, the Vice-Chancellor of NALSAR set the ball rolling and declared the Conference open by expressing his disappointment that the year 2019 will not be remembered for what the Court did do, but for all that it did not do. Dr. Sitharamam Kakarala, a former professor of NLSIU took the opportunity to share his anecdotal experiences of having worked alongside Dr. N.R. Madhava Menon. He exhorted the need to move from Legal Education 2.0 to Legal Education 3.0 where NLUs must start paying more attention to their postgraduate programs such as LLM, MPhil and PhD. Finally, Vikram Raghavan informed the audience that the objective behind the Law and Other Things Blog was for people to engage with the constitution, and that this conference was designed to be one such platform. Prof. N. Vasanthi gave an overview of the conference agenda.

Thereafter, the first substantive panel on ‘Institutional Developments in the Judiciary’ was opened by the moderator Sidharth Chauhan. Dr. Arghya Sengupta began the discussion by deliberating upon the issue of judicial independence and highlighted the development of new criteria for the elevation of judges to the Supreme Court. Apurva Vishwanath then narrated in detail how the Supreme Court failed to secure natural justice to one of its staffers who had accused the former Chief Justice of India of sexual harassment. Venkat Venkatesan expounded on the role of a legal journalist in holding the judiciary accountable. Finally, Anuj Bhuwania talked about how the Supreme Court was merely granting rights without remedies in 2019.

The second panel, moderated by Dr. Arun Kumar Thiruvengadam, dealt with ‘Federalism & the Constitution’, where the focus shifted from courts to other constitutional actors. Prof. Anthony Blackshield opened the discussion by explaining the unique features of federalism in Australia, Canada, USA and South Africa. Alok Prasanna Kumar explained the federalist challenges that the 15th Finance Commission is facing in the drafting of its report. Malavika Prasad drew the audience’s attention to the issue of de-operationalization of Article 370 of the Constitution vis-à-vis the special status of Jammu and Kashmir. Suchindran Bhaskar Narayan discussed the complicated role of governors in a quasi-federal country like India. Lastly, Rohit De provided the historical context to federalism in India since the 1940s and explained the political reluctance to federalism.

The third panel was chaired by Professor Amita Dhanda in memory of Shamnad Basheer, another luminary who sadly passed away in 2019. The panel was titled ‘Emerging Voices’ where the work carried out by young and emerging scholars was presented. The panel consisted of Chintan Chandrachud, Kanika Gauba and Manav Kapur, all of whom spoke on the theme of the current tides against the Citizenship Amendment Act, 2019 (“CAA”) with a focus on the history of India and its partition in 1947. Chintan Chandrachud also talked about the Kartar Singh case and the lessons to be learnt from cases that we have forgotten.

On 26 January, Justice Swaminathan took part in a flag hoisting ceremony on the occasion of Republic Day.

Day Two of the conference witnessed four panels. The first panel pertaind to Citizenship and was opened by the moderator Arvind Narrain. Justice Swaminathan commented on the Citizenship Amendment Act, 2019 and urged everyone to try and engage with the views of those supporting the CAA in order to facilitate a conversation. Aymen Mohammad then discussed federalism and Article 355 of the Constitution to point out the fallacies in the Union’s justification that it was protecting the federal units. He also elaborated upon the procedural shortcomings of National Population Register (NPR) and found the trio of CAA-NPR-NCR to be inherently violative of individual privacy. Dr. Mohsin Alam Bhat drew upon his experiences from Assam to enlighten the audience about ‘twilight citizenship’ by explaining the inhumane functioning of foreigners’ tribunals. He observed that a culture of fear, excessive lawmaking, and mass suspicion was being fomented by the current Union government. Thereafter, Nizam Pasha stressed upon the need to examine citizenship and the “right to have rights” in the larger constitutional framework and exposed the absurdity of the ‘Akhand Bharat’ claim.

The panel on ‘Law and Religion’ saw Professor Faizan Mustafa critiquing the Supreme Court’s judgment in the Ayodhya dispute as one which seems to have effectively rewritten the laws of property, possession and evidence. Sruthisagar Yamunan highlighted inconsistencies in courts’ attempt to strike a balance between social reform and religious rights of communities through the Sabrimala and Ayodhya judgments. Suhrith Parthasarathy then drew the audience’s attention to the inconsistencies in Supreme Court’s decision to review its judgment in the Sabrimala case. Professor N. Vasanthi, who was moderating the session concluded by emphasizing the need to have a proper relationship between law and religion.

The penultimate panel was devoted to reviewing ‘Developments in Equality Jurisprudence’ where Arundhati Katju used the Ayodhya judgment to exposit how the main challenge before the Supreme Court is engaging with the interplay between Article 14 and secularism. Dr. Anup Surendranath began by pointing out how the Court failed in its application of the test of manifest arbitrariness in the Bombay Dance Bar Case. Alok Prasanna Kumar sought to explain how the 10% reservation brought about for economically weaker sections of the society through the 103rd Amendment fell afoul of the Basic Structure doctrine and the manner in which it revealed confusion regarding the objective and purpose of reservations on the part of the Union government. Dr. Sudhir Krishnaswamy concluded the session by positing some grilling questions to the panelists and also pondering over what he termed as the ‘elephant in the room’- the question of reservations for the Muslims.

The last session on reforming tribunals was moderated by Vivek Reddy. He prompted the speakers to speak on the possibility of removing tribunals, instead of reforming them. T. Prashant Reddy and Dr. Arun Thiruvengadam discussed the existing inefficiency of tribunals and the Court’s decision in the Roger Mathew case.

The conference ended with a vote of thanks by Sidharth Chauhan, who also invited speakers to give their valuable advice and recommendations for the upcoming editions of The Courts and The Constitution Conference.

Thanks for sharing this!!!

Thanks for review some of the major decisions of Courts delivered in the preceding year in this press release.