Stay not to be granted beyond 6 months in Criminal/ Civil Proceedings unless extended by a speaking order.

A three judge bench of the Supreme Court of India directed that in all pending cases where stay against civil or criminal trial proceedings is operating, it will automatically come to end from 6 months commencing from 28th March 2018 The 6 month limit will also apply for future cases wherever stay is granted. However, in exceptional cases the stay can be extended by a subsequent speaking order showing why continuing the stay was more important then commencing the trial. The bench also elaborated as to when stay ought to granted and how such power is to be exercised. The judgment is significant as it would help tackle judicial delays, considering that findings of a study showed that stay on proceedings cause a delay of up to 6.5 years

In a recent judgment, a division bench of the Supreme Court has asked the centre to consider the proposal for a central selection mechanism for filling up vacancies in non-constitutional courts and to figure out ways to reduce inadequacies in present system of appointment to the constitutional courts. Further, it opined that the need of having full time experts in order to assist in identifying, evaluating ad scrutinizing candidates at pre-appointment stage and to evaluate performance post appointment should also be considered. While suggesting this, the Court cautioned that the same should be done without affecting the independence of judiciary. Previously, the apex court had asked the states for their responses regarding a central selection mechanism for subordinate judiciary. This is significant considering the complex problem of judicial vacancies in India.

The Malaysian parliament passes ‘The Anti-Fake News’ bill
The Anti-Fake News Bill, 2018 was passed in the Malaysian parliament with a view to safeguard the public against the spread of fake news. It proposes a 6-year jail term and a fine of up to 500,000 Ringgit for those deemed guilty of creating, distributing, or publishing ‘fake news’. Amnesty International has termed the bill as an “assault on freedom of expression” because of its vague definition of ‘fake news’, extra-territorial jurisdiction and arbitrary arrest powers for police. In India, the Information & Broadcasting Ministry had to withdraw its ‘fake news’ directive when orders came from Prime Minister’s Office on being accused of restricting press freedom. However, the Ministry has also constituted a new committee to frame rules for regulating news portals and media websites.
Further Reading:

The Supreme Court refused to keep in abeyance its recent ruling in SK Mahajan v. State of Maharashtra wherein it laid down stringent safeguards that must be complied before arresting an accused under a case vide the Scheduled Castes and the Scheduled Tribes Act, 1989. The court was hearing a plea by the Centre seeking an interim stay on the SC’s March 20, 2018 order, in the wake of violence in several states. The Supreme Court judgement which proposed anticipatory bail for the accused and a preliminary enquiry before registering a case under the SC/ST Atrocities Act has been criticized for diluting its provisions. Recently, the Kerala Government petitioned the Supreme Court to review the verdict.

Shanti Bhushan challenges CJIs power as master of the roaster

Former law minister and Senior Advocate Shanti Bhushan has filed a petition in the Supreme Court to put in check Chief Justice of India’s power as master of the roaster. The petition seeks that the power to list matters should be shared with the senior most judges of the court and cannot be used arbitrarily by the chief justice acting solely. This petition is significant in the context of the unprecedented press conference wherein the four senior most judges of the Supreme Court criticized the incumbent CJI Dipak Misra for abuse of administrative power in allocation of cases. This press conference invoked mixed reactions and has been a major topic of debate in the legal community. This petition was mentioned before Justice Chelameswar who refused to hear it citing that he does not want a reversal of his order within the next 24 hours, after which it was mentioned in the CJI’s court. A similar petition questioned the unilateral power Chief Justice of India to arbitrarily constitute benches, wherein the court reiterated the superiority of the Chief Justice.

Right to marry a person of choice protected under Article 21

The Supreme Court released its full judgement following a brief order in which it reinstated the marriage of Hadiya and Shafin Jahan while setting aside Kerela High Court’s order that annulled Hadiya’s marriage. The apex court allowed NIA to continue its investigation with respect to criminality of the situation albeit with the rider that the same should not encroach upon marital status of the couple. The court held that “The right to marry a person of one’s choice is integral to Article 21 of the Constitution.” The majority judgment, from a three-judge bench, was written by Chief Justice Dipak Misra and Justice Khanwalkar supplemented by Justice DY Chandrachud’s separate concurrent judgement. 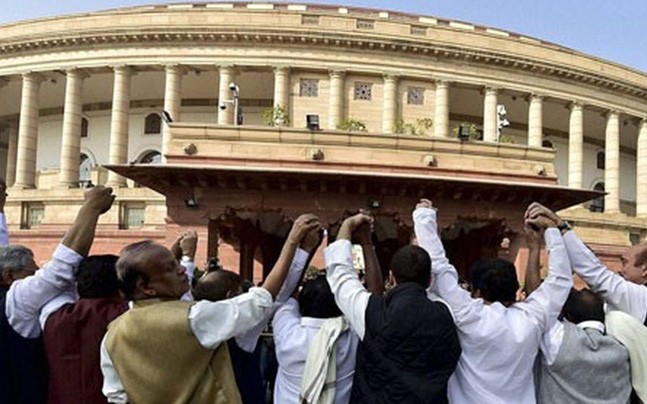 Lok Prahari: A Struggle for Legislative Accountability and Reform

Birth of the Indian Supreme Court

The book “Supreme Court of India – The Beginnings” is a study of the role of the Federal Court in India, which was the precursor to the Supreme Court, and the initial years of the Supreme Court. This book has been edited and introduced by Mr. Vikram Raghavan and Mr. Vasujit Ram.
Justice B V Nagrathna, a judge at the High Court of Karnataka gives a speech at the event of the book release in Bangalore […]

By Namita Wahi
The CPR Land Rights Initiative report on‘The legal and political economy of land rights of Scheduled Tribes in the Scheduled Areas of India’, delineates a conflicting regime of protective and displacing laws, as well as conflicting policy narratives underlying these laws which facilitate the displacement of Scheduled Tribes and their corresponding landlessness. […]
Read More

Reflections of an American lawyer in India
By Susan L. Karamanian

The author visits Tamil Nadu National Law School in Tiruchirappalli (Trichy), India to teach a short course on international law, focusing on issues such as the value of a US perspective on law, in general, to Indian law students and lawyers […]

Read More
We thank Gayatri Gupta and Chittkrishna Thakkar for their assistance in collating the data, and Benjamin Vanlalvena for designing this newsletter.