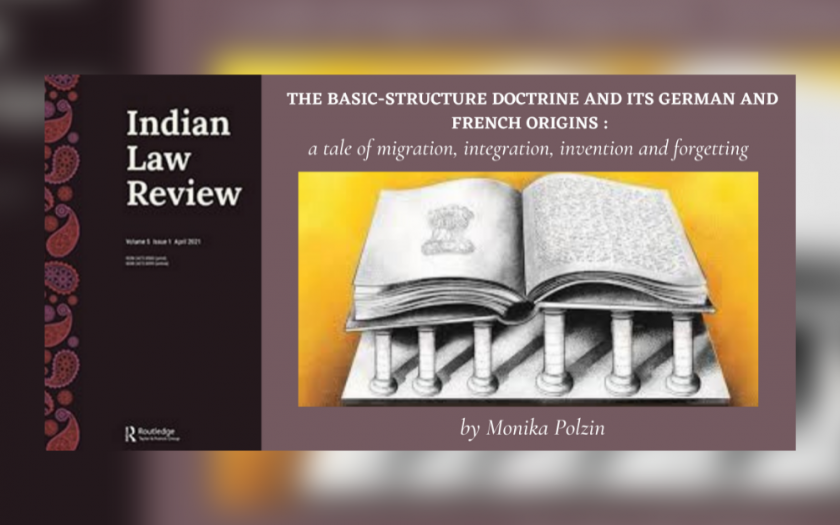 [Ed Note: In this post, Prasidh Raj Singh responds to the arguments made by Monika Polzin in her paper titled “The basic-structure and its French and German origins: a tale of migration, integration, invention and forgetting”. You can access the article here and the summary of the paper here. This is a part of our New Scholarship section, wherein we have been inviting discussants to respond to the public law themed articles featured in Volume 5 the Indian Law Review. You can access all the posts in this discussion here]

The origin and adoption of the basic-structure doctrine has in many ways developed jurisprudence across the globe. The democratic setup, alongside Courts interpreting and defending the originalism of the Constitution in tune with the changing dimensions of the state and the quasi-federal structure operating in India, is an enduring symbol of a robust and independent judiciary.

The article written by Dr. Polzin is of much relevance in identifying the roots and modes of how the basic-structure doctrine has developed and interpreted by various courts across all jurisdictions.  The article deeply examines the work done by German scholars Carl Schmitt and Dietrich Conrad, as well as that of French scholar Maurice Hauriou.

It is important to note that Schmitt’s work on implied limits on constitutional amendments is deeply examined in the article and his approach to the understanding of constituent power has been highlighted. Schmitt argued that the constituent power is a legal entity that existed outside, alternatively alongside, a constitution and proceeded to explain what constituted the constituent power.  It is pertinent to comment on this unrealistic approach, as saying that the constituent power is constituted by the people or the monarch is rather unacceptable. This reminded me of the Social Contract Theory of Thomas Hobbes wherein certain rights to govern was  conferred on an entity, coupled with the entailing duties and responsibilities. The argument that the formation of a State and the power entrusted with its organs through self-drafted constitutions should also involve the power to amend is more likely acceptable.  However, the constituent power being assigned to the people, as high emphasized by Schmitt, is not a realistic approach, nor is his idea of an almighty constituent power. Dr. Polzin rightly mentioned in her article that these dangerous and illegitimate parts of Schmitt’s theory are currently lost and have not migrated to form part of the basic-structure doctrine adopted by the Indian Supreme Court.

However, Schmitt’s approach, wherein he mentions that the amending power is not permitted to change those norms that make up the constitution in the material sense is well accepted. Moreover, his argument that the identity and continuity of the constitution as a whole are to be preserved is the right approach and has been adopted, or is still intact, in various jurisdictions. For example, in India, the Apex Court has upheld this point through various judicial pronouncements.  However, the approach taken by Kelsen that there are no material limits on constitutional amendments, wherein he based his argument on the wording of Article 76 of the Weimar constitution, is somewhat dissimilar to Schmitt’s approach. As opposed to Schmitt, Kelsen adopted a straight-line approach by discarding the idea of an almighty and mystical extra constitutional constituent power. This part of the article where Dr. Polzin incorporates the work done by Kelsen and his approach towards the constituent power, vis-à-vis Schmitt’s work, is well organized and explained in the article.

Clause (5) of Article 368 ,which has been held as unconstitutional, had specifically stated that“For the removal of doubts, it is hereby declared that there shall be no limitation whatever on the constituent power of parliament to amend by way of addition variations or repeal the provisions of this constitution under this article” The wording of the deleted clause (5) reminded me of the view taken by Kelsen when he argued that there are no material limits on constitutional amendments or even a total revision of the constitution.

Instead of repeating what Dr. Polzin has already mentioned in her article, it is important to highlight some points mentioned above which are relevant to our present discussion.  The view taken by Carre de Malberg and Leon Duguit again emphasizes on creating a separate constitutional organ to amend and protect the constitution.  The jurisprudence developed through various sources and adoption of work done by many renowned authors is much appreciated but certainly does not give any clarity on the point. There seems to be a lack of clarity coupled with unrealistic assumptions, such as higher principles or almighty constituent power where Schmitt did not specify how the people could act as the constituent power. Certainly this part requires more detailed discussion, which I felt was missing in the article.

It is important to highlight the case of Horatio P. Livermore vs. E.G. Waite wherein it was stated that “The term Amendment implied such an addition or change within the lines of the original instrument as will effect an improvement, or better carry out the purpose for which it was framed”. Therefore, the purpose and the objective behind the constitutional amendment must be identified; an aspect which is not covered in Dr. Polzin’s article. The view adopted in the Horatio case that amendments should bring about an improvement or carry out the purpose for which it was framed is of much relevance and should be considered while discussing amendments to the constitution.

By this time, the idea of the basic-structure doctrine and what constitutes constitutional norms is clear to the extent that constitutional identity must be upheld at all costs vis-à-vis amending powers as part of the same compartment and cannot understood in isolation. I think that the constitutional trust conferred upon the Parliament entails a sense of responsibility and reliability that is expected to be practiced by them before making any change in the constitution; this is what Conrad’s writing also stressed upon and which is lucidly covered by Dr. Polzin in her article.

The next part of the article is, what I would call, reminiscing the landmark and historical milestones of the Indian judiciary in the context of the basic- structure doctrine. The tale started from Shankari Prasad, moved towards Golaknath and finally settled the law and scope of amending power under Article 368, by a narrow majority of (7:6), in Kesavananda Bharati . It was highlighted that the word “amendment” in Article 368 of the Indian Constitution does not include the right to repeal, or alternatively, to destroy the Constitution’s identity, i.e., the basic structure.  Dr. Polzin rightly included the observations made by Justice Khanna that the word “amendment” postulates that the old constitution survives without loss of its identity despite the change and continues even though it has been subjected to alterations. As a result of the amendment, the old constitution cannot be destroyed.

Many new terminologies have been propounded to protect constitutional identity such as solemn document, precious heritage, basic structure, framework of the old constitution, structural interpretation, basic foundation and so on. The length and mode in which the Courts have interpreted and examined the ambit and scope of Article 368 shows the tremendous amount of responsibility they have towards the constitution. Dr. Polzin rightly incorporated the observation made by Justice Sikri in Kesavananda Bharati that the basic-structure doctrine is also meant to prevent abuse of parliamentary power. Justice Sikri stated that if a political party with two-third majority in Parliament for a few years could so amend the constitution so as to debar any other party from functioning, establish totalitarianism, enslave the people, and after having effected these purposes, make the constitution unamendable or extremely rigid, then it would bring about an extra-constitutional revolution.

The article carefully incorporated the relevant discussion so as to correctly project the proposition and law propounded by the Supreme Court in Kesavananda Bharti. The jurisprudential approach and acceptance of the basic-structure doctrine helped to mitigate unconstitutional amendments. The presence of Article 368 does not allow Parliament to alter the basic-structure of the constitution, but rather to amend the Constitution to keep in line with the constantly progressing & transforming needs of society, without losing its identity.

Mr. Prasidh Raj Singh is a faculty at the National Judicial Academy, India (joined in 2015) and is involved in structuring and coordinating several programs on constitutional law, criminal law, commercial law, GST, cybercrimes, etc. for judges at various levels at the Academy.  He is additionally designated as the Public Information Officer for the Academy.

The basic-structure doctrine and its German and French Origins: Response by Prasidh Raj Singh – NALSAR University of Law | Library | eLibrary