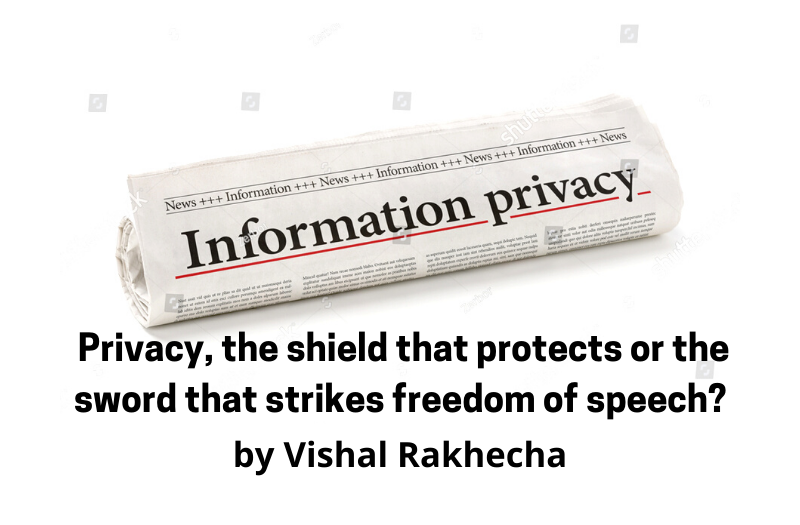 [As part of our New Scholarship section, we have been inviting discussants to respond to the public law-themed articles featured in Volume 5 of the Indian Law Review. You can access all the posts in this discussion here. In this post, Prof. (Dr.) Shruti Bedi reviews the arguments made by Vishal Rakhecha in his paper titled, Privacy, the shield that protects or the sword that strikes freedom of speech? The article can be accessed here. A summary of this article is available here.]

Conflict invariably arises when the public access to information has to be balanced with individual privacy rights. Vishal Rakhecha in his article adeptly manoeuvres the never-ending debate between free speech and privacy to provide a viable solution to the issue of horizontal application of the right to privacy specifically in the context of the contestation between the developing fundamental right to privacy under Article 21 and freedom of press under Article 19(1(a) of the Indian Constitution. The paper attempts to fill in the constitutional silences on two issues, the horizontal application of the right to privacy and ‘balancing’ the two fundamental rights under the Constitution.

Free speech and free press are the most coveted rights in the U.S. and any attempt to restrict them is frowned upon. On the other hand, right to privacy is an established fundamental right in the European Union which has a developed privacy jurisprudence. In India, it has only recently been recognised as a fundamental right. The Puttaswamy judgment did not examine horizontality in the context of privacy, as pointed out by the author, that it was not the mandate of the case. However, Justice Kaul does allow for the protection of the right against non-state actors, albeit limiting it to regulation of processing and usage of data. I therefore, disagree with the author when he concludes that the judges in Puttaswamy did “not intend” to provide for a horizontal application of the right.

The paper proposes that the right to privacy must be adjudicated ‘indirectly horizontally’. In an ‘indirect horizontal’ application of privacy, the respondent in the case is a private actor. The challenge in such a case is not to the respondent’s acts, but to the law that he relies on to justify his acts. It is the law that authorises the private action, which is the issue. This suggestion is indicative of the author’s intention to limit the horizontal application of the right. This may be due to the unwillingness of the author to go beyond the text of the Constitution. However, from the perspective of the ‘living constitutionalist approach’, there is a need to strengthen the ambit of protection afforded to fundamental rights. Although the scope of the blog post does not permit a detailed examination, the decision of the Kerala High Court in Vilasini v. State of Kerala may be scrutinized. Not only did the court in this case, apply the European Court of Human Rights (ECtHR)’s ‘assessment test’ to determine violation of privacy, but it also upheld the horizontality of fundamental rights by enforcing positive duties on the State. Even if the author insists on ‘indirect horizontality’, we need to clearly outline the circumstances when it can be invoked in proceedings between private parties, so as to maintain consistency with constitutional values.

The author has in the paper traced the judicial support to the proposition that privacy can be protected through non-disclosure. Subsequently he proposes that in cases where public interest is served by disclosure, then ‘privacy interest’ must give way to ‘public interest’. Although I agree with the application of such exhortation, however, the pointed reliance on the employment of the ‘public interest test’ somehow results in the perception that the courts should direct their attention towards the impact of the publication as opposed to an individual’s purported intent to waive his right to privacy. This view does not attribute adequate weight to an individual’s position and thus becomes one-sided. It overlooks the distress that an individual may incur in its effort to focus attention on educating the public.

Although a perfect solution evades us, the application of the ‘mores or public decency test’ would be a definite improvement. It is recommended that without doing away with the ‘public interest test’, a more judicious outcome will be achieved by balancing ‘public interest’ with the extent and nature of invasion suffered by the individual. Justice would be better served by asking the question, as to whether the publication is repugnant to the social conscience at that time and place. To make its application more comprehensive, the level of public interest satisfied by the publication would have to be determined.

Secondly, rationality during deciding such matters may be evasive as courts are likely to be influenced by preconceived ideas concerning the ‘medium of publication’. The word ‘press’ does not simply include newspapers but could also include books, magazines, radio, movies, television and the current digital world. The author therefore needs to specify the ‘medium of publication’, as privileges accorded to publications would be not be the same for different platforms. Newspapers in general may be afforded blanket protections for publications of news, articles etc. However, to extend a privilege which is specifically based on the word ‘news’ in a newspaper, to other mediums of expression would result in anomalous consequences. As technology gets more intrusive, the courts are having to wrestle with drone journalism, growing news media etc. Privacy is and will be invaded more and more by technology. This lacuna would have to be dealt with dexterity to ensure that the democratic tradition of free speech is not discounted.

Undoubtedly, the doctrine of balancing rights has been a thorn in the side of the constitutional courts of various jurisdictions. Recalibration of two fundamental rights and that too between non-State actors is indeed a herculean constitutional task. I commend the author’s effort in this regard. However, the suggestions on the manner of applying the balancing test must incorporate further clarity and flexibility in its approach. The paper reflects serious academic rigour undertaken by the author and bears the imprint of deep research. It’s methodical style and coherence adds to the quality of study.

The decision in the recent Pegasus snoop case and the report of the Justice Raveendran Committee on the issue of protecting privacy rights of citizens as well as the issue of freedom of the press including the right of journalists to ensure protection of their sources will be an insightful addition to the subject of the paper. Simultaneously, the outcome of the case may benefit from the suggestions of the author in demarcating the ‘balancing’ based on the normative values of these rights. In a time when courts have been according an exaggerated concern to privacy, such suggestions will assist in shaping the course of balanced justice.

Review by Prof. (Dr.) Shruti Bedi – Privacy, the shield that protects or the sword that strikes freedom of speech? – NALSAR University of Law | Library | eLibrary