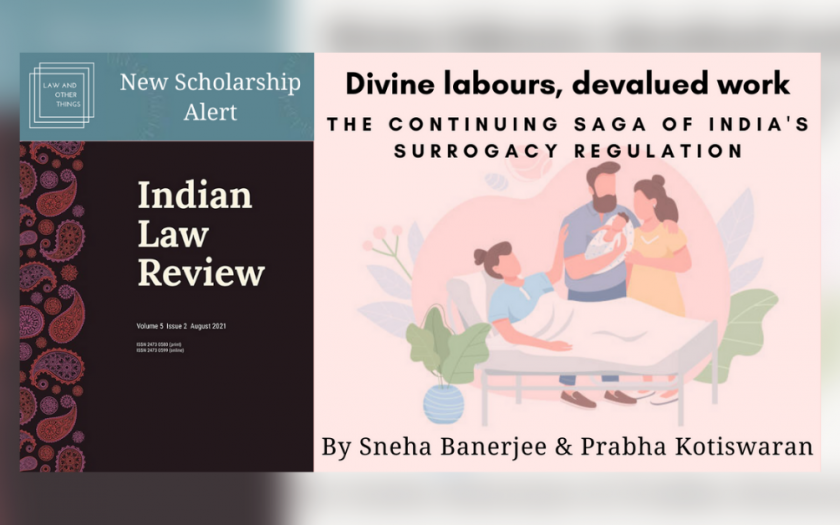 Ed Note: As part of our New Scholarship section, we have been inviting discussants to respond to the public law themed articles featured in Volume 5 the Indian Law Review. You can access all the posts in this discussion here. In this post, Anindita Majumdar responds to the arguments made by Sneha Banerjee and Prabha Kotiswaran in their paper titled “Divine labours, devalued work: the continuing saga of India’s surrogacy regulation”. You can access the article here and the summary of the Paper here.

This insightful analysis and critique of the new draft law on surrogacy in India looks at pertinent questions of commercialisation of a practice which is deeply fraught due to the social and moral conflicts it gives rise to.

Banerjee and Kotiswaran highlight the glaring gaps within the draft surrogacy bill to engage with the overwhelming pressure within surrogacy legislation to ban commercialization of the practice. Their paper engages with global practices and highlights how legal guidelines on surrogacy and reproductive labour continue to be fixed on the eulogization of motherhood, and the corresponding squeamishness regarding paid care and domestic work. Placing their critique and discussion within a feminist perspective also includes an engagement with ethnographic studies of commercial surrogacy in India wherein the dominant analysis is centered on a materialist feminist perspective. The materialist feminist perspective portrays surrogates within their particular subject position at the interstices of capitalism and patriarchy. The materialist feminist approach seeks to provide a pragmatic understanding of how banning commercial surrogacy pushes the practice underground leading to human rights violations and increasing criminalization.

In response to Banerjee and Kotiswaran, I find that their use of ‘manifest arbitrariness’ is a particularly provocative idea to think about the draft Surrogacy Bill 2019 (henceforth referred to an ‘the bill’).

This is a running theme through the paper. Though mentioned in particular reference to the exclusion of LGBTQ, single men and women accessing surrogacy—the framing and drafting of the surrogacy bill carries certain forms of ‘damaging’, irrational provisions that can impact its functioning.

Thinking through the draft Bill, one arrives at an understanding of how many provisions exhibit elements of manifest arbitrariness, whether it is the absence of assisted reproductive technologies from an identification of gestational surrogacy, or the choice of a ‘close relative’ as surrogate. The absence of IVF-ART is particularly bizarre, considering the gestational surrogacy arrangement is dependent upon the use of the technology—a point the authors highlight at different points of their critique.

This is important to think through in recognizing that the surrogacy bill is first and foremost about birthing progeny and imagining ‘what kinship is’.[1] When we begin to look at the Bill from the vantage point of ‘kin making’, a lot of its manifest arbitrariness begins to exhibit signs of continued investment into the idea of the patrilineage, and the patriarch as the prime owner of the family and progeny.

Thus, continuing with the idea of the close relative of the intended parents (IP) as surrogate, the missing conversation of intrafamilial coercion and exploitation comes to the forefront while seeking to prevent coercive commercial gestational surrogacy. The bill seeks to replace it with a supposedly non-coercive form of obligatory relationship that operates on the idea of the Indian family or ‘kutumb’ as a safe haven. The violence of intergenerational control within the patrilineage is a lived reality for many women in India—and may act as an effective mechanism to force ‘close kin’ into surrogacy. Where is the discussion on this within the bill?

Elsewhere I have suggested that this obsession with the ‘close relative’ is a remnant of the equally problematic Transplantation of Human Organs Act, 1994 [THOA].[2] Altruism, it seems, operates through the predominant ideas of kin and kinship.[3] Such a line of thinking then feeds into the authors’ repeated emphasis on the romanticised essentialism that the bill identifies motherhood with. Mothers are inherently sacrificing, selfless women and to seek compensation for such a role is akin to sacrilege.

The idea of sacred and profane worlds colliding is a recurring theme within legal and state discourse on surrogacy—as evident in the number of countries enacting prohibitory regimes. Countries such as France, Germany and Spain have enacted legislation banning surrogacy in keeping with the idea of how commercialization violates intimate spaces and the notion of motherhood as a unitary self. Even though technological innovations have changed the ways in which genetic motherhood has come to be a contested space, with egg providers and gestates occupying separate spaces—motherhood was always contested.

The authors use the term ‘regulatory arbitrage’ to chronicle the transnational/national changes in legal regulations linked to changing ideas of regulation and liberalization in contemporary practices such as surrogacy. Thus, in the last section of the paper, the authors outline how regulatory arbitrage works through an oppositional impact on how transnational movements and mores impact different national laws. The concept gives an important insight into how transnationalism has come to be an essential element to the workings of commercial surrogacy in India and abroad.

Therefore, it makes sense that the section on compensatory surrogacy is followed by a discussion on criminalization of surrogacy. Compensated surrogacy includes payments for medical expenses and coverage for insurance. This, according to the authors is how the draft bill intends to avoid exploitation of surrogates. The surrogate as an exploited woman is a recurring trope within popular media narratives,[4] and also in critical academic literature.[5] Despite the cautious notes by the Rajya Sabha Parliamentary Standing Committee regarding collapsing the linkage between exploitation and commercialization—the ‘deification of women as mothers’ continues. As deities, mothers are always and forever altruistic, as identified earlier. Compensation creates a conceptual and practical separation from commercialization. Here, the authors’ provocative discussion in relation to forced labour or ‘begar’ to compensated surrogacy is particularly important. This is a linkage that resurrects legal injunctions and judgements regarding care work and reproduction as forms of labour that deserve adequate compensation.

Banerjee and Kotiswaran find the proposed ban on commercial surrogacy dependent on the legalese that emerges from an overreliance on criminalization. The language of a ban places the Indian state in the eternal role of paternalist trying to control women, minorities and other practices which have a tinge of morality attached to it. The identification of criminalization is to a large extent dependent upon the ways in which certain actors are penalised with monetary sanctions and jail time within the Indian penal code. Thus, the prohibitory nature of a law tends to work through negative marking of people/ actors rather than just particular actions. This is highlighted by the authors in discussing how the ban on commercial surrogacy forces doctors, agents, surrogates and IPs into potential criminality without addressing the acts that may be ‘criminal’.

At the end, the authors are certain that this bill as law is unworkable, for all the reasons identified. They do a comparative analysis of this Surrogacy Draft Bill with the recommendations of the Rajya Sabha Parliamentary Committee regarding the former—to provide an engaging critique and discussion of the bill. This article discusses important clauses within the bill and provides insights into how legislation should be formulated considering dynamic situations globally and culturally.

Anindita Majumdar is an Assistant Professor of Sociology in the Department of Liberal Arts at the Indian Institute of Technology Hyderabad. Her book titled ‘Transnational Commercial Surrogacy and the (Un)Making of Kin in India’ was published in 2017 by Oxford University Press. Anindita recently contributed to the Oxford India Short Introductions Series on Surrogacy, which was published in 2019. She can be contacted at [email protected].

[3] Majumdar, Anindita (2021). The birthing precariat: altruism in the service of capital. Anveshi Broadsheet on Contemporary Politics.

[4] Majumdar, A. (2014). The rhetoric of choice: the feminist debates on reproductive choice in the commercial surrogacy arrangement in India. Gender, Technology and Development, 18(2), 275-301.

Thank you for this information. For a country law is very important, without law a country have no discipline. As an advocate you are doing such a good things. You are providing such a awesome work. you provide your knowledge and your experiences. It will help those people who doesn’t know about this law. As I Advocate for Supreme Court of India